Three years ago, we published an article about Kyrö Distillery Company. A lot can happen in three years. In this case, what has taken place is considerable and wide-ranging development – although, since we’re talking about whiskies, “maturation” might be a more fitting term. In keeping with the first article, we will look at not only the maturation of the beverage but also that of the company itself.

On July 4th, our rye whisky was ready for bottling. As soon as one stepped onto the distillery’s premises, it was apparent that the company had come on in leaps and bounds. Employees wearing Kyrö Distillery Company t-shirts were milling around, greeting us cheerily. The increase in the number of people around spoke volumes about the development that had taken place since our last visit, but there was also something new and exciting in the atmosphere. All this paved the way for what Jouni Ritola, one of the owners, who is also responsible for sales, told us later on with passion clear in his voice. Everyone who has dealings with the distillery, whether as an employee or as a customer, becomes an informal ambassador for the company, helping to spread the word about its products.

Whereas in 2014, master distiller Kalle Valkonen, as the company’s only employee, filled our cask himself, the July 4 bottling operations involved Tea, Juulia, and Rami also. Juulia glued the labels on the bottles from our small batch with deftness gained when every label was affixed by hand.  Since those days, such a time-consuming approach has become infeasible: 250,000 liters of the company’s hit product, Napue Gin, will be sold in 2017 alone.

This shows one of the main changes that have occurred over the past three years. When we first wrote about Kyrö Distillery Company, we introduced it as a whisky maker, but these days the company is known among most people for its gin. That said, Isokyrö’s whisky is now ready for what could be termed a comeback. In the first year of operations, 300 casks were filled with whisky and left to mature. Napue’s breakthrough was followed by a couple of busy years, during which the company was unable to give its full attention to whisky production. This year, however, will see the company distill 100,000 liters of whisky in all, and it plans to step up production up to 250,000 liters next year. 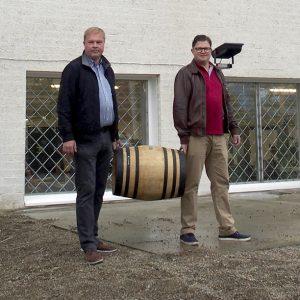 After our bottles had been filled and sent to a local licensed Alko store for picking up, as required by law, we headed for brunch with Jouni, who praised our bold decision to jump on board at such an early stage in the company’s operations. This is yet another sign of the way the company has embraced modern marketing practices.  No other seller has thanked us for buying its product. Kyrö Distillery Company sells not only spirits but also a sense of community. Phrases such as “liquid to lips” and “winning hearts and minds” crop up frequently when Jouni talks about the company. Some of this is image marketing, familiar from Campari and Karhu beer adverts, but selling community spirit is where Jouni and his partners have excelled.

So what about that whisky? The clear liquid with a slight whiff of moonshine we saw last time has matured into a golden-brown beverage that carries aromas of rye and chocolate. The flavor has hints of toffee and oak. And does it taste good? The master distiller described this drink as “simply the best.” The laughter that followed this statement serves as an indication that there might be some image marketing in play here too.

This website uses cookies to improve your experience while you navigate through the website. Out of these cookies, the cookies that are categorized as necessary are stored on your browser as they are essential for the working of basic functionalities of the website. We also use third-party cookies that help us analyze and understand how you use this website. These cookies will be stored in your browser only with your consent. You also have the option to opt-out of these cookies. But opting out of some of these cookies may have an effect on your browsing experience.
Read more about our cookies
Necessary Always Enabled
Necessary cookies are essential for the website to function properly. These cookies ensure basic functionalities and security features of the website, anonymously.
Functional
Functional cookies help to perform certain functionalities like sharing the content of the website on social media platforms, collecting feedback, and other third-party features.
Performance
Performance cookies are used to understand and analyze the key performance indexes of the website, which helps in delivering a better user experience for the visitors.
Analytics
Analytical cookies are used to understand how visitors interact with the website. These cookies help provide information on the number of visitors, bounce rate, traffic source, etc.
Advertisement
Advertisement cookies are used to provide visitors with relevant ads and marketing campaigns. These cookies track visitors across websites and collect information to provide customized ads.
Others
Other uncategorized cookies are those that are being analyzed and have not been classified into a separate category yet.
Save & Accept